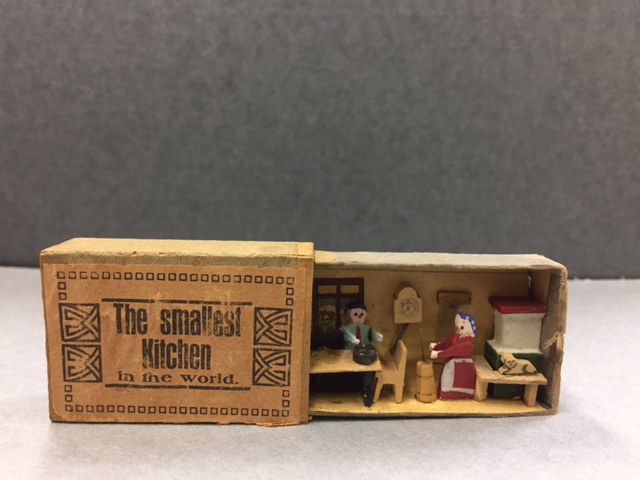 This kitchen scene, “The Smallest Kitchen in the World”, is one of four matchbox scenes we have here in the museum. A variety of these matchbox dioramas were produced such as a wood-carving workshop, school room, and a sick room. Produced in Germany, the ones in our collection were possibly made in the early 1900’s. The four in the museum collection were owned by a woman in England and were sent to a Fremont County resident who later donated them to the museum.

So why is the cover in English if it was produced in Germany? Well, it appears that covers in German were made for the domestic market while covers in English were created for export.  And one of those that we own has the initials DRGM on the cover. These initials mean the product was created under the German Reich, the official name of the German nation state from 1871-1943. From one tiny artifact we can certainly learn quite a bit. Small artifacts don’t always have small stories!

The information in the article was complied using research conducted by the Royal Gorge Regional Museum and History Center.