As the days heat up, people start to think about the best way to keep cool. And what better way than a trip down the Arkansas River on a raft?

Whitewater rafting has been around far longer than you might think. The first recorded attempt to navigate the Snake River in Wyoming was recorded in 1811! But it wasn’t until the 1840’s that the first rubber raft is thought to have been invented.  Purchased from Horace Day, John Charles Fremont used a rubber raft in his 1842 Platte River survey. And the patent for the craft? Horace Day filed it on January 15, 1846 under patent number 4356.

Rafting truly took off during the 1960’s. Rafts built specifically for running rivers and rafting companies began to appear. In fact, in the 1972 Munich Olympics, athletes competed in whitewater sports for the very first time.  Now known as the canoe slalom, competitors maneuver through the rapids with either a canoe or kayak.

And here in Fremont County, rafting is a big industry. Between 1982 and 1992, only a ten year span, the rafting business grew at a rate of 18% each year and was already a $30 million industry. Even then, more than 190,000 people took rafting trips on the Arkansas River alone. Compare that to the only 12,000 in 1987. And since then the numbers have only grown!

Just last year in 2016, 550,861 commercial guests rafted in Colorado with an economic impact of nearly $180 million. The Arkansas River here in Fremont County made up 40 percent of that total, counting 223,878 guests. And with the multitude of rafting companies all along the Arkansas River, there’s always a chance to find some adventure.

The Whitewater Festival, a summer event to promote the outdoors and the expansion of Whitewater Park and river restoration, is just around the corner!

So if you’re in town this summer and want to learn some more history of the area or do some research in our archives, stop by the museum! We’re open Wednesday-Saturday between 10am-4pm. 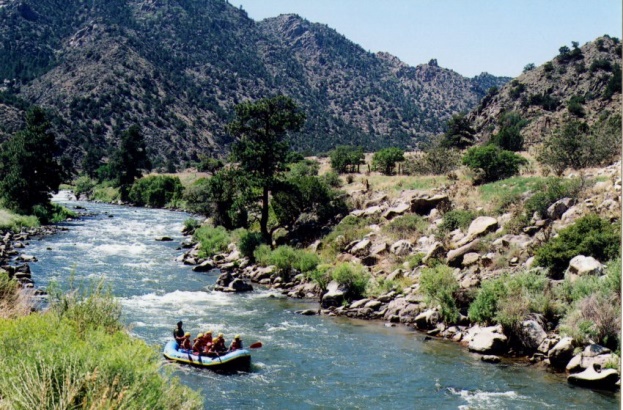