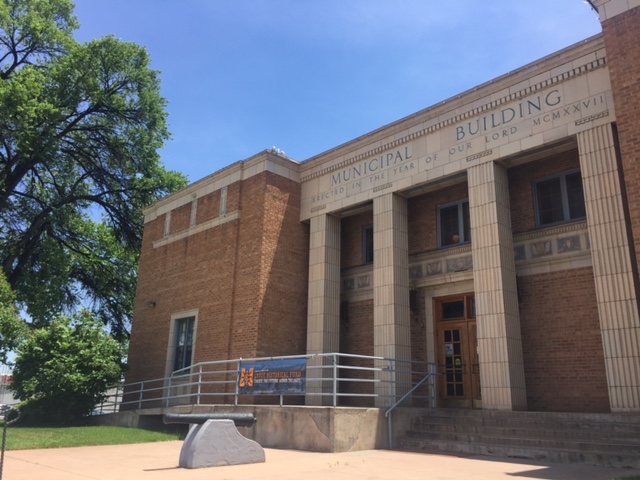 Father’s Day is coming up and in honor of that I think there is someone we should talk about. Not as a father in the typical sense but rather as a founder. Dall DeWeese is an important player in the history of Cañon City due to his effort at historical preservation by giving his collection to the city for a museum. So, in a way, he is the father of us, the Royal Gorge Regional Museum and History Center.

William Dallas DeWeese was born near Troy, Ohio on October 1st, 1857. DeWeese started his own construction company in 1878 and a nursery/horticulture business in 1881 with his friend Charles Robert Culbertson Dye (C.R.C.Dye). In 1884, DeWeese moved to Cañon City, originally as an agent but eventually sold his business operations in Ohio and ran the “Iron Clad Nurseries”. He moved his family out to Cañon City in 1886 and began to make money as a land agent and nursey owner. Aware that to have his business would need irrigation to survive, DeWeese gained financing from W.H.H. Dye, the father of his old business partner, and they began a ditch irrigation project. The DeWeese Dye Ditch and Reservoir Company began diverting water into Cañon City in 1896.

DeWeese was a colorful character in the area, involving himself in many business ventures and as a hunter-naturalist spent time enlarging his collection which holds a variety of animals and a few fossils. But DeWeese didn’t only hunt big game; he also tried to protect it. After a few surveys in Alaska, DeWeese was upset by the loss of both land and wildlife and even wrote to the recently elected Theodore Roosevelt about his concerns. DeWeese also showed concern over the preservation of extinct animals such as the Diplodocus longus skeleton found in the Garden Park Fossil Area. Found in 1915, DeWeese contacted the Denver Museum in 1916 and donated the skeleton to the museum which was a helpful addition to their still young paleontology section. But DeWeese didn’t donate everything he found. Some of it he later incorporated into the stone fireplace he designed right here on the second floor of the museum.

Which brings us to the museum. DeWeese agreed to donate his collection to the city with the stipulation that the top floor of this building always be a museum. And so the Municipal Building was built! The building originally housed the museum upstairs and city chambers and offices on the lower levels. DeWeese supervised much of the work while building occurred and designed the fireplace that holds a center place within his collection. The fireplace has a variety of….unique features. Designed and supervised by DeWeese, dinosaur fossils, stones from around the world, and even gastroliths (also called gizzard stones) give this fireplace a distinct look not found anywhere else. And what’s a gastrolith you might ask? It’s a stone ingested by an animal (in this case a dinosaur) to help grind food. Various pieces of sauropod bones, black tourmaline from China, petrified wood from India, and many other items from DeWeese’s travels make up the fireplace.

The building was opened in 1928 and DeWeese’s collection of natural history could be appreciated by the public. Though he died only six months after the opening of the building, Dall DeWeese is remembered in many ways for his contributions to the city and the part he played in making it what it is today. And because of him, the museum exists as it is today. After a new City Hall was opened in 2004, the Royal Gorge Regional Museum and History Center opened its doors and now houses exhibits, a research room and, of course, the collection of Dall DeWeese.

So stop by and visit us! If you want to know more about local history, dinosaurs, or are just looking for something to do we’d love to see you! We are open Wednesday through Saturday from 10 am to 4 pm and admission is always free.

The information presented within this article has been compiled using research conducted by the Royal Gorge Regional Museum and History Center.