Now: Before I start writing my blog, I will alert you to the order of–

Could you imagine what it would be like to ride many miles in an oscillating stage coach with hard wooden seats and often with a mere 15 inches of space for yourself?

Not only hard seats but most of the time overcrowded inside and outside the coach. Passengers coming from many walks of life inside or outside the law.  All different sexes, ages and nationalities.

False prophets, street prostitutes, madams of houses of ill repute, preachers, saloon keepers and gun carrying outlaws. Escaped jail birds, gold miners and prospectors to mention just a few. All are looking to get rich quick some way or a another and want to get to where the gold is, as quickly as possible.

Those ones whose last bath taken a week ago, to as far back in time as unimaginable, are crammed and wedged into a coach made for seating six. Passengers found themselves rubbing elbows, shoulders, knees, backs and close to rubbing noses. Then air reeking of human odors that could reach to the high heavens adding more misery.

Usually someone had brought a bottle or two of whiskey (AKA as “rot gut”) on the coach that gets past around for a nip or two.  A constantly crying baby, in an exhausted mother’s arms, has a wet and dirty diaper, colicky and teething. Whiskey at this time was also used for infants’ ailments.

High country in Colorado is well-known for its changeable inclement weather. Stage coaches often met up with sideways rainstorms, hail stones size of golf balls, high winds, close lightning strikes followed by booming thunder. Blizzards so harsh that you can barely see your hand in front of your face. Snow drifts are deep with snow slides threatening.

A spooking team of horses is a handful to say the very least. A stage driver has to be a skilled, experienced and competent handler of horses if not you might not live to tell your story.  Today, it would be comparable to a diesel truck driver’s cab and loaded trailer to “jackknife” on a slick road in the high country.

Notorious mountain passes were nerve-wracking to cross (still are today especially for the “flatlanders.”) reached elevations 8,000 to 12,000 feet. During winter time both the stage driver and stage guard would put wooden skis on the wheels. Again, like the truck driver putting tire chains on.

The only cover was a piece of canvas overhead for protection for those inside the coach. Those on the outside of the coach riding on the leather luggage rack, on top coach or any other available space they could hang on, would be like sitting ducks. Dangerous and massive rock, snow and mud slides in the mountains were common, especially if there has been heavy snowfall, strong winds or rain.

If this was not enough to deter them from taking the stage coach journey into thin air.  How about a ravenous bear looking for a meal; that seemed to have appeared out of nowhere. Add to the mix of hazards; stage coach bandits lurking around the next bend.

However, this was the premier way to travel that day.  Most passengers often overlooked the hardships and risks of life and limb. They only remembered the speed, the beauty of the scenery which was (and still is today) absolutely breathtaking and enough to stir the soul of the most cold-hearted traveler. Then there were ones who claimed that was the first and last stage coach ride for them! 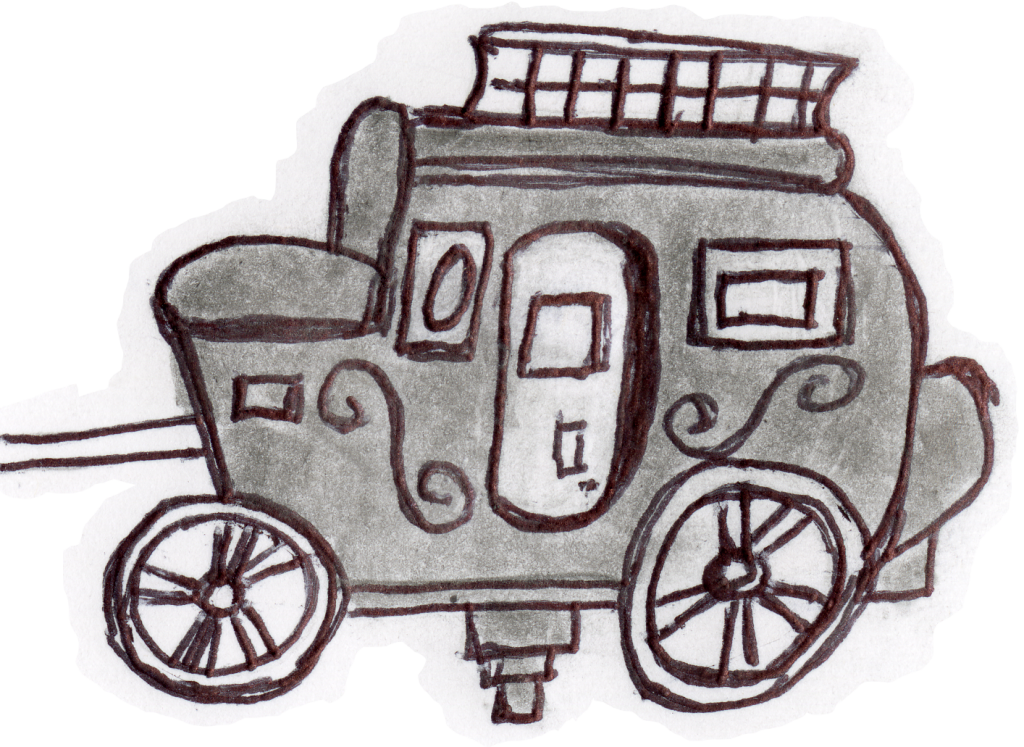 Boot:  the leather compartment at the rear of the stage and also under the driver’s seat

Bull-Whacker:  a driver of a freight wagon, usually with oxen

Corduroy Road:  a road created by logs laid across a swampy, low-lying area, placed together or “ribbed” like corduroy cloth

Drummer:  a traveling salesman soliciting trade in the West after Civil War

Groom:  a stable man that takes care of the horses

Hame:  one of two curved bars fitted to a horse collar, holding the traces of the harness.

Jehu:  a name of a stagecoach driver, taken from the Biblical character who drove his vehicle fast and furiously

Singletree:  horizontal crossbar, to the ends of which the traces of a harness are attached

Staging:  the business of carrying people and mail by stagecoach

Swings:  the horses in the middle position of a six-horse hitch

Traces:  the side straps by which a horse pulls the stagecoach

Wheelers:  a person who makes and repairs

Whippletree:   the horizontal bar at the front of the stagecoach, to which singletrees are attached

Atop of the Treacherous Shelf Road

Road builders had made survival possible in the high mining country (not recommended for the faint of heart or weak in the knees). Cripple Creek at 9,494 feet above sea level in a granite pocket, is shadowed over by Mt. Pisgah at 9,600 feet in elevation (Native Americans call Look-Out Mountain.)  Making the trip rises in altitude from Canon City to Cripple Creek to over 4,000 feet.

After a Cripple Creek cowboy-prospector, Bob Womack, took some ore samples for assaying in Colorado Springs.  His ore had a high gold content of $250 a ton.  The gold rush was ignited! 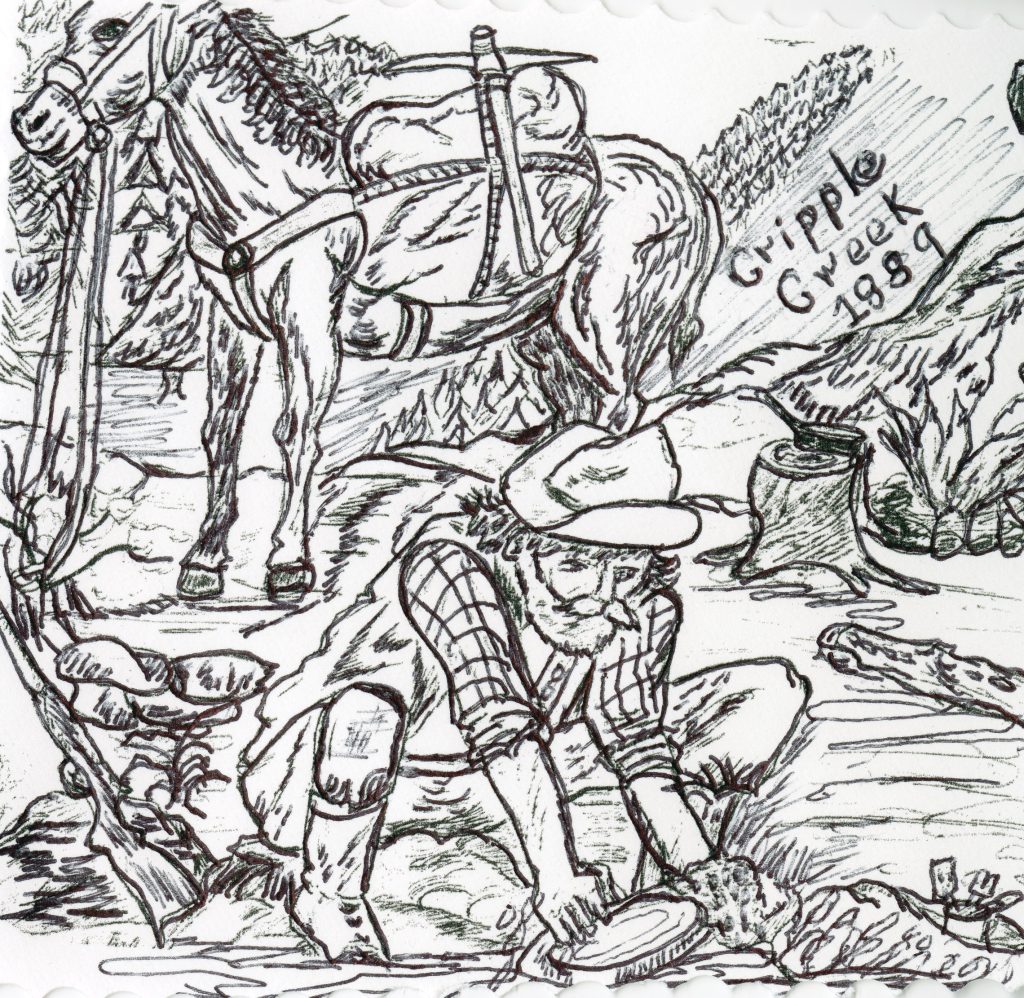 A town bearing the creek’s name was incorporated in 1892 and population boomed to 20,000. Transportation remined a major problem.  How to get goods and equipment in and how to get the ore to the reduction mills in Florence and Canon City.  The closest railroads were in Colorado Springs some 45 rugged miles eastward over Ute Pass and to Canon City some 30 miles southward from Canon through rugged canyons. Shelf Road is an excellent example.

A group of Canon City’s business men came up with a solution.  On November 25,1891 they filed articles of incorporation for “The Canon City and Cripple Creek Toll Road Company. The hand written document is still on file in the Fremont County Courthouse.

Now: I pose the question.  Could you imagine the sights, smells, commotion, swearing and bellowing among the passengers?  Personally, I would rather have been an outside passenger. After reading about potential death traps. You might ask why would anyone take such a risk?

Then:  Passengers over looked the hardships. For this was the top-of-the-line transportation of day for speed, seeing gorgeous scenery and the pure feeling of excitement in a Colorado Stage Coach excursion in thin air.

Now: Two questions I want to ask you.  Have you recently taken a passenger airplane flight? And are you still willing to take another trip because of the speed of modern flying? In spite of, all the delays and cancelations and lost luggage and turbulents?

Read the following advertisement and take a look at their stage coach.  Looks a very comfortable and roomy.

Leaving Canon City At 7:30 am daily and arriving at Rosita and Silver Cliff at 3:00 pm on the same day, making close connections both ways with Denver & Rio Grande Railway.

TICKETS FOR SALE AT DENVER AND PUEBLO

The Colorado and Stage and Express Co., was one of several stage lines to link Canon City with Rosita, Silver Cliff and the other mining camps of the of the Wet Mountain Valley in the 1870’s and early 1880’s.

The road was up the Oak Creek Grade and an alternate route was through Copper Gulch.

Early newspapers of that period often wrote of the large number of passengers who rode the stages—mining men, gamblers, homesteaders, miners seeking work, ladies of the evening and others.

Note: that the trip from Canon City and Silver Cliff took 7 ½ hours and made connections with DR&G, which was just then building into Canon City.

When Gen. William J. Palmer run his Grape Creek into the valley a couple of years later, it made the end of stage and freight lines.  They continued to exist for a brief time, but withered away under the tough competition of the railroad and finally railroads had its washouts and finally gave up the ghost.  They had periods of booming business but those were temporarily respiting.

Nevertheless, the stage lines played an important role of the early developments of the mining areas.

The little Binckley and Hartwell book from which the above picture is taken is rare.  Only a few copies are still in existence.  The publication provides a valuable and authentic glimpse back into the frontier period of nearly a century ago. (Copies are available at RGRM&HC for reading only.)