Now:  I have been participating in the festivities that have been meticulously planned for Fremont County’s 150-year Anniversary Commemoration.  This is to pay tribute to the resilient men, women, and children who worked diligently to make this celebration possible. Here are what some of the women long ago  thought should be done.

[At the end of this blog see some of the faces of the past.]

What The Women Have Done for Fremont County

[Emma Ghent Curtis from the Four Mile Area was a teacher and a noted editor of the “The Royal Gorge Review newspaper” from 1891-1896.  She was a supporter of the Populist Party with concerns about Women’s Suffrage. Emma authored two books; “The Fate of the Fool,” published in 1888, and “The Administratrix,” in 1889.]

“If Women Had the Doing:”

[Reported in the Fort Collins Courier on 11/14/1889 page #4:  “In addition to telling a story, Emma’s writings included a message to her readers about the social and economic injustices and inequalities in society at that time.”]

“Although we cannot claim the honor of having accomplished all of these eight however, we have not only made many of them.  We have outstripped the desires of 1903.”

Now:  I was impressed and seen some lessons that could be practiced today for our City Beautiful.

Amanda met & married Marshall P. Felch during the Civil War, where she served as a nurse.  They settled in Montezuma, Colorado and their final move was to the Garden Park area just north of Cañon City.  She cared for Marshall as he struggled with health problems resulting from his war service.  Amanda was a mother of four children and was a great contributor to Marshall’s discoveries of dinosaur bones.  Amanda became well known for her dinners that she prepared and served visitors from near and far who came to see the sites of her husband’s fossil discoveries.

Bird Millman O’Day was born in Cañon City, Colorado on October 20, 1890.  As a child she traveled with her parents performing high tight rope walks in small circuses. her father taught her the skill in the backyard of their home and general store on 3rd and Main Street in Cañon City.  As an adult, Bird went on to a brilliant career.  The little girl from Cañon City had brought pleasure and entertainment to people on multiple continents.  During the Depression of the 1930s, she lost her fortune and her health.  She joined her mother & family back in Cañon City where she died on August 5, 1940.

Because of failing health, Emma Ghent Curtis moved from Indiana to Colorado.  Upon her arrival in Cañon City, she resumed her teaching career .  She met & married James Curtis who lived in the Four Mile area northeast of Cañon City.  Emma wrote poetry, short stories, and novels.  Some of which were “The Fate of a Fool” (1888), and The “Administratrix” (1889).  Emma was also the editor of “The Royal Gorge Review” newspaper, in an attempt to promote the idea of women’s suffrage among the farming and labor classes.

Julia Mack came to Cañon City in 1875 by way of wagon train with her husband Henry Mack.  Henry owned and managed a lumber yard named Pioneer Lumber Company, located at 6th and Main Street in Cañon City.  Henry died in April of 1882 and Julia’s third child died in January of 1883.  Alone, she continued to raise her two other children while also running the lumber business.  She stayed active in the church and later she was instrumental in starting the public library in Cañon City and was a charter member of the Friends in Council organization.

Emma Alice Webster came to Cañon City in 1871 with her parents and one brother.  She became active with local community service organizations.  She was best known for her involvement with the Cañon City Ladies’ Library Association and Friends in Council.  She, along with other members of the Cañon City Ladies’ Library Association were able to acquire a small building at 505 Main Street to house books that they collected from local townspeople.  One way they solicitated was to push baby buggies around town to various households to collect donated books and other reading materials.

Information for this blog post was compiled by
Loretta (Stevens) Bailey
from various sources including the book:
“Spirits of the Past”
compiled by Linda M. Carlson, Ph.D. & Margaret Stiles Storm.

This book can be found in the collections at the
Royal Gorge Regional Museum & History Center. 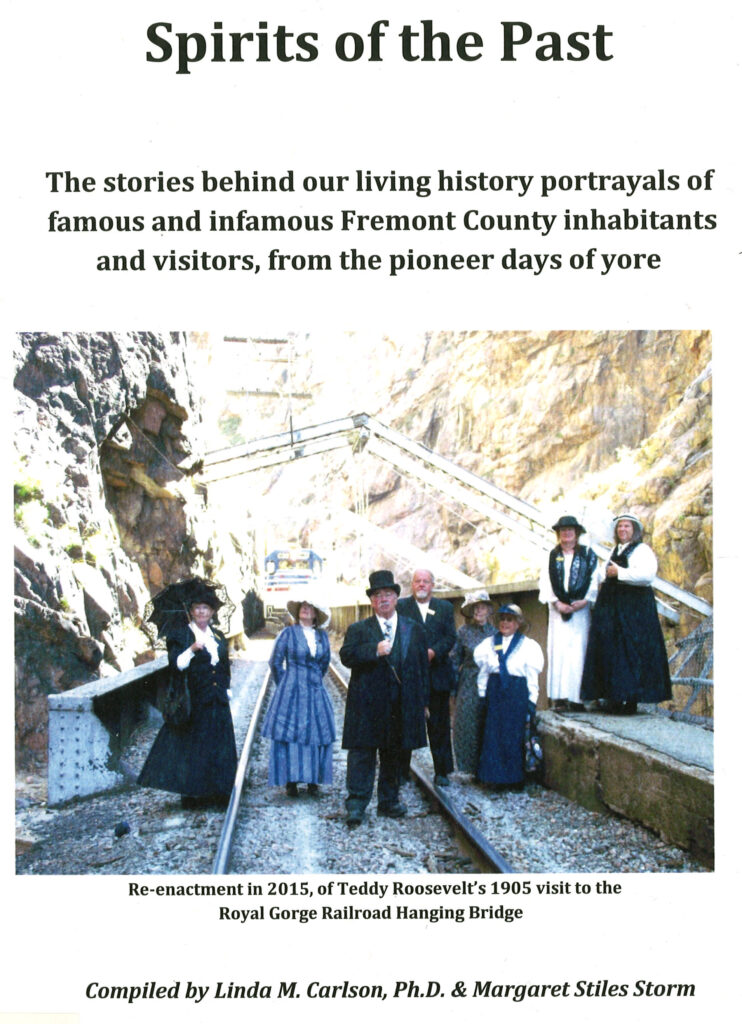