THE ROARING 20’S: The Decade that Metamorphosed America like a seismic wave which prorogated through-out the country.

Now: Looking backward in time one hundred years ago, it’s revealing how events in our country and our culture changed so rapidly in a short span of time. I compared that span of time to our country and our culture of today, as it is going through similar events and cultural changes.  I thought about Fremont County in the 1920’s and began researching at my favorite hang-out, Royal Gorge Regional Museum & History Center.

Then: The dark, dreary and devastating days were over when World War 1 ended on November 11, 1918, leaving in its wake war weary souls. As the 1920’s got under way Americans were ready for better times. The driving force was fueled by having lots of fun, plain and simple. Anything goes- especially for the youthful generation.

A feisty generation of the 1920’s declared its independence from the conventions of outraged parents. The “Flappers” and their friends changed the rules; dancing, dating, smoking, showing off in daring fashions. Young, carefree and always on the look-out for the next party, the “Flappers” became the symbol of the times. Women embraced the new found freedoms starting with the right to vote.  The dowdy fashions of the past were tossed for shorter skirts and slinky tight-fitting blouses and dresses, exposing flesh that had been shrouded in layers of attire.  Silks, satins and dropped waist-lines replaced the constrictive corsets and girdles.  African Americans introduced and played in black and white Honky Tonks. Jazz was hot, and it was cool.  The sizzling Jazz took the country’s youth by storm. The music started in New Orleans and soon music lovers in Chicago, Kansas City and New York gyrated to jazz dances while poets wrote jazz poetry.

Transportation swiftly made progress from horses, buggies, covered wagons and rough riding trains. Affordable automobiles were now traveling on real roads. In 1927 Charles Lindbergh made the first transatlantic flight. In the 1920’s railcar maker Pullman upgraded its famous sleepers, and by 1929 the company had introduced air-conditioned sleepers. In 1921 ship owners of luxury liners for the super-rich switched gears to affordable liners with comfortable accommodations for middle-class travelers.

However, dirty secrets lurked behind all that prosperity and glamour. The 18th amendment never had a chance to be effective and was a failed experiment. Alcohol was made at home, you drank it in Speakeasies or slipped on the sly. Folks did whatever it took to keep the “hooch” flowing.  Prohibition had created a nation of criminals. The Mob ruled with notorious Al Capone, organized crime’s king-pin. Cops and politicians took bribes to look the other way while the public skirted the law.  Laissez-Faire politicians of the decade were pro-big business. Republicans Wilson, 1920-Harding, 1923-Coolidge, 1924-Hoover, 1929.

The Ku-Klux-Klan quickly gained power, and by 1924 their numbers had been built to a staggering 4 million members. All were in favor of a 100% “Americanism” and bitterly expressed pure hated toward African-Americans, foreigners and anybody else who was not native’-born white Protestant.

Many Americans were mired in poverty.  Workers in textile mills, coal miners, farmers and African American share-croppers were all desperately looking for a better life. As the gap steadily expanded between the privileged and underprivileged, resentment was building among those left out of the decade’s prosperity. 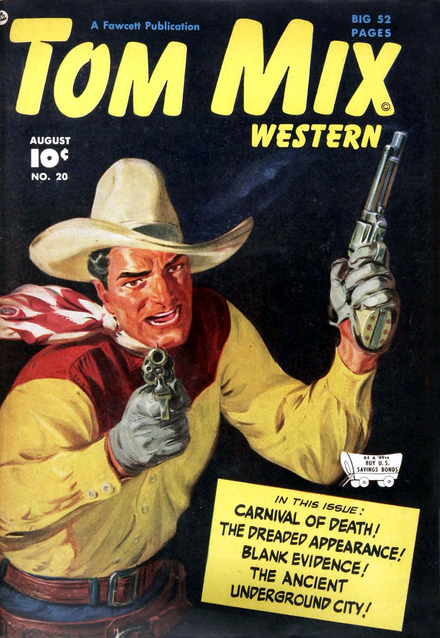 The Silent Movie business arrived from California as early as 1911 and continued to grow and prosper until 1918.  Selig Polyscope Company was the first to set-up their business in a building on 3rd and Main Street for offices and shooting indoor scenes. Well known rodeo star and leading actor Tom Mix was brought along to help with promotion. Tom was also well known as a heavy drinker, gambler, sharp shooter and a “woman chaser.” His wife could never tame him no matter how hard she tried.

One night Tom was drinking at Hell’s Half Acre tavern, located between Cañon City and Florence, when a dangerous shooting incident happened. The story goes that this incident involved Tom, his six-shooter, and a shot glass with a lemon sitting in it on the bar. Tom landed in Prospect Heights’ two-celled jailhouse to get sobered-up.

Colorado Motion Picture Company moved into Cañon City on August 30, 1913.  Two of their films produced at the Royal Gorge were “Pirates of the Plains” and “Across the Border.” The fast-cascading waters of the Arkansas River had carved through the hard granite rock.  These two geological forces, after millions of years, created the spectacular, breathtaking gorge- natural scenery that could have never been produced in Hollywood. Warden Tyndan, of the Colorado Territorial Prison, gave the movie company permission to film inside the prison walls- on the condition that he had a part playing himself in the movie.

In
1916 two women driving a fancy automobile from Alameda, California, that called
themselves the “Reel California Girls,” arrived in Fremont County.  They charmed the Cañon City Chamber of
Commerce and Warden Tyndan into assisting them to build a picturesque majestic
rock structure on the primitive rugged north rim of the Royal Gorge.

The Vista Lodge
became known as a dance hall with beautiful hardwood floors, an elegant dining room
with delicious served meals, and first-class entertainment. The two women
placed ads in the local newspapers in 1923.

Dance! Dance! Dance! At Vista Lodge tonight May 18th. A 7-Piece San Isabella Orchestra. From Oklahoma City, Furnishes the Music.  All Good Night for All. Supper will be served in the Blue Room.

By 1924, hard times had fallen on the lodge and its residents.  There seemed to have been resentment festering between the Reel Girls and Cañon City’s government and citizens due to rumors of prostitution and “bootleg liquor” being available at the lodge and four cabins that had been built some time back.

On February 25, 1925, the Cañon City Daily Record and Florence Citizen reported a devastating fire to Vista Lodge. Thus marked the end of a landmark which for the past ten years had been a guide to one of the most beautiful scenic drives in the west.

Planes, Trains, Automobiles and Jitney Taxi Service were all available for the fine (and not so fine) citizens of Fremont County.  The Royal Gorge Airways Inc. opened a flying school on August 9, 1929.  The company advertised in the Cañon City Daily Record that they had two planes; one used for instructions in on-the-ground training and in the air, and the other equipped to carry passengers, day or night.

Florence and Cañon City both had architecturally stunning brick train depots in the heart of the cities. Passenger and freight steam engine trains made scheduled stops.

The KKK crept into Fremont County in 1922 and quickly infiltrated into most of the county and city offices, the school board, and some civil organizations. Their headquarters were at the Cañon Hotel.  Local minister Reverend Arnold became the Grand Dragon and is buried in the Lakeside Cemetery. The tomb stone on his grave has a symbol of a flaming cross.

State conventions were held in Cañon City which brought in hundreds of Klan members dressed in regalia.  Cross-burning ceremonies were held on school grounds at Ninth and College and paraded down Main Street.  In addition, they published a monthly newspaper Kolorado Klan Kourier in Cañon City.

Meanwhile, a small band of monks from Pennsylvania, who lived in an apple shed, had plans to build the Abbey High School.  The KKK tried to prevent this from happening by using down and dirty shenanigans, but the monks were determined, and in 1924 a one hundred room school building stood proudly in an apple orchard. The Abbey opened its doors in September, 1926 for world-wide and local students.

Later, the KKK and its influence was dismantled and driven out of Cañon City.  Guy U. Hardy was credited for uniting other prominent business men to push the KKK out of the city. This taskforce, along with Warden Tynan, stopped KKK members from storming the prison. The warden had a machine gun and guards posted by the front entrance.

Before and during Prohibition a well-known night club was built in Rockvale in 1920.  Gus, Joe, Charlie and Sam Salardino owned and operated the Gold Nugget, billing it as “The Gay Spot of the West.” It was a high-class place with music, dancing and a good floor show every night. There were back rooms with guards posted at the doors for customers who wanted to gamble and drink alcohol or go “sporting” (a euphemism for gambling and/or prostitution). Brothels and sporting houses were close-by. The club was also a popular hang-out for silent movie actors, actresses and crew.

In the early 1920’s T. Lee Witcher was the District Attorney who prosecuted Prohibition offenders and Attorney Maupin defended them. On one occasion Maupin, who was well-known for his thirst, gulped the whiskey offered as evidence.  This left this case in permanent adjournment.

Bootlegging was the term for illegally manufacturing, transporting and selling liquor. With plenty of hiding places and close access to the Arkansas River and numerous creeks for water, Fremont County had its fair share of hidden stills, vats and bootleggers. When Prospect Heights was incorporated their law-makers allowed liquor to be sold openly within the town limits. Cañon City and Florence remained “dry.”

Mr. W.J. Davis, superintendent of the Fremont Mine, was delivered a Bruck “25” by the Cañon Auto Company recently.

The first Dodge, “The Mystery Car” sold in Cañon was purchased by Miss Dusky Baxter from the Canon Auto Company a few days ago.  Miss Baxter already competent at the wheel.

I was not able to find anything on the “The Mystery Car,” however I found in my research that Dusky Baxter/Kier/Nicholas became well known in the roaring 20’s.

A search warrant was sworn out and the Ardell Rooming House at 400 Main Street was raided and 4 pints in a room that was alleged to be rented to Joe Brown.

Found in an ash pit in the alley behind the building were broken bottles that smelled strongly of liquor and which the authorities believed that was thrown in there shortly before the raid. All efforts of finding Joe Brown were to no avail…

Mrs. E.R. Kier owner of the place was taken into custody and went before Justice Hardford’s court. She put up bond of $500 and trial was set for June 8th at 10 o’clock.  She expressed great surprise at her arrest.

I have a question for the readers.  Do you believe history repeats it self over and over with human-beings?  I do, even more so after writing this blog.

***Photos and captions unless otherwise designated with accession numbers are taken from TIME/LIFE magazine “The Roaring ‘20s: The Decade That Changed America.” Intended use is for educational purposes only.