This menu from the archives of the Royal Gorge Regional Museum and History Center features cuisines and ingredients that were both local to Cañon City and from elsewhere, likely imported by train. It was a perfect companion to the opening of the Atchison, Topeka, and Santa Fe Railroad (AT&SF) station in Cañon City on January 19, 1888.  Every day, a passenger train ran from Pueblo to Cañon City in the morning and returned in the evening once a day. A freight train also made the same daily trip, delivering supplies to the mines near Prospect Heights.

After a day of speeches and a procession that drew a total of two to three-thousand people, a banquet was held at the McClure House (331 Main) at 9:30 P. M. for the AT&SF officials and distinguished local residents. According to the Canon City Record, the guests entered the dining room to the accompaniment of music by the Moore Brothers and Sears Orchestra. Five toasts and nine speeches were given by such men as Governor James Peabody, Benjamin F. Rockafellow, and Anson Rudd.

A seven-course meal was served during the banquet: 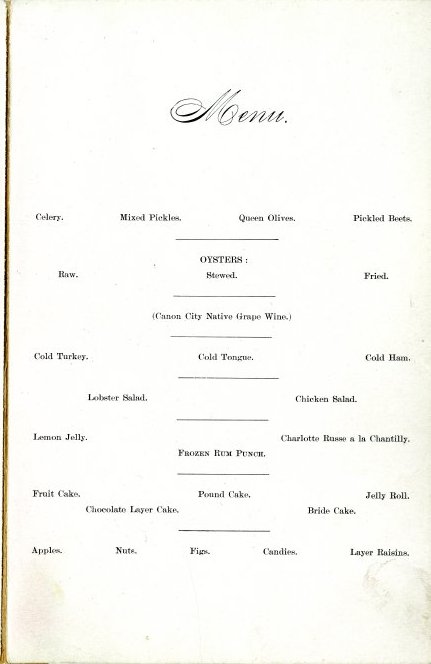 Many of the speeches given that day praised the agricultural triumphs of Cañon City; some of the foods served at the banquet were likely made from local produce and meats. These include the Pickled Beets, Cold Turkey, Cold (Beef) Tongue, Cold Ham, Chicken Salad, the fruit and cream used to make the Charlotte Russe a la Chantilly, Fruit Cake, and Canon City Native Grape Wine.

Without the existence of the AT&SF and other railroad lines in Fremont County, other items on the menu would have not been present. These include the Raw, Stewed, and Fried Oysters, Queen Olives, Lobster Salad, Nuts, and Figs.

If you would like to learn more about the Atchison, Topeka, and Santa Fe’s presence in Fremont County or to look through our collection of old recipe books, please stop by our museum! Our open hours are from 10 A. M. – 4 P. M. from Wednesdays-Saturdays. We are located at 612 Royal Gorge Boulevard in Cañon City. If you have any menus from local restaurants or events or copies of local family recipes, we would also be interested to add them to our collections!