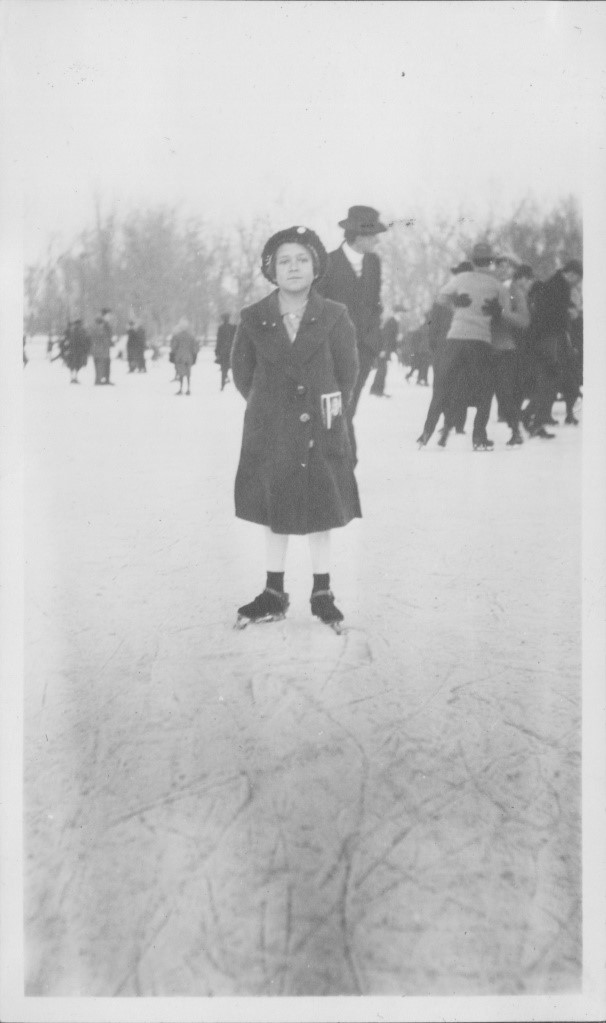 Now:  Cañon City provided ice skating for the young and any others who had ice skates and could manage to skate on man-made rinks or natural ice rinks on lakes, ponds, creeks, and livestock water tanks, and the Arkansas River.

As I was researching files, photographs, microfilm, and old maps, I came across an article in the late 1880’s about high school teenagers and the school band.  The plan was for the skaters to skate through the Royal Gorge (before there was a bridge) on the solid frozen Arkansas River. The band would also have ice skates on and follow close behind while playing their instruments.  The skaters all had a jolly good time. Now that’s innovative ice-skating with quite the sound system!

Then: Growing up in the 1950’s on Riverside Drive, my four siblings and I were without ice skates but had plenty of imagination and desire to skate on the ice.  We created our own skates by packing snow on the bottom of our shoes. Our glides on the ice were far from graceful but that did not stop us from have our own merry ice-skating parties with the neighborhood kids who lived in South Cañon.

Skating has been good the past week and the young folks have been making the most of it these moonlight evenings.  Merry skating parties are out every evening, to Sell’s and the [Lincoln] Park reservoirs.

Warden Tynan of the penitentiary had a dozen prisoners and a couple of teams at work this morning cutting the weeds and clearing the old water works reservoir adjacent to the City park on South First street in preparation for their conversion into skating ponds for the young people of this community during the coming winter. The Canon City Civic Improvement league took up the matter of flooding the old reservoirs with the city council some time ago and through its efforts splendid skating will be provided there for the public during the next few months.  The city council very generously offered to fill the reservoirs from the water mains free of cost and through the {unreadable} the Civic Improvement league, assisted by Warden Tynan and the city council, healthy, invigorating sport will be provided for skaters during the winter season.

SKATING AT THE OLD RESERVOIR

The old waterworks reservoir near the river on South First street affords fine skating to young people of the city and attracts a large number of skaters every afternoon and evening. The reservoir, which has been dry for many months, was recently flooded by order of the city council at the request of the officers of the Civic Improvement Leagge [sic] in order that skating might be provided for the public. That the action of the league in the matter is duly appreciated is evidenced by the large crowds which gather there every night to enjoy the sport. The water to the reservoir is only about two feet deep and there is but little danger of drowning in the event of falling into it. Notices have been posted about the reservoir at the instance of the city council warning skaters that the city is not in any way responsible for any accidents or mishaps that may occur from the breaking of the ice or from other causes.  In other words, skaters assume all risks in going upon the ice.

CITY RESERVOIR AT PUMPING STATION TO BE MADE SKATING RINK

Following the suggestion of Mr. W. E. Galley, Mayor Frank P. Smith has arranged with City Water Commissioner C.W. Van Patton to flood the reservoir at the city pumping station in order that the children of Canon City may have a skating rink during the Christmas season. The reservoir will only be flooded to a depth of 2 ½ feet and there will be no danger from drowning or other accidents of that nature.  The pond will probably be filled Wednesday and will be ready for the children about Saturday.

ICE SKATING ON THE OLD RESERVOIR

The site of the old city reservoir at the foot of the Hogback, a few hundred yards west of the upper end of Cooper avenue, which was flooded by the instance of the city council last summer, promises to afford ideal skating during the coming winter, if the weather gets cold enough.  There was considerable ice there the first of the week and many young folks about town took advantage of it for skating purposes. The pond is a large one and the water is quite deep; in some places ten or twelve feet.  In view of the possibility of drowning skaters should be careful not to venture upon the pond until the ice is thick enough to assure them against all danger of breaking.

Many Cooperate To Prepare Pond For Ice Skaters

A great deal of public interest was shown in preparations made by the people of the community on Monday and Tuesday to make available the offer of Charles Sells to turn over Sell’s pond for skating purpose during the cold weather.

The county furnished a truck and driver to assist in the undertaking. The Citizens Unemployment league contributed three men and a truck to haul wood for building fires along the banks of the pond. Warden Best of the penitentiary donated the labor of a group of prisoners to clear the snow from the ice.  The city council provided free meals for the prisoners while engaged in the undertaking.

The enterprise proved a very popular one and between 75 and 100 people, young and old, enjoyed skating there Tuesday afternoon.  Almost as many pleasure-seekers were there Tuesday night, some of them remaining until nearly midnight to enjoy the sport.  Wednesday was hardly less alluring and skating parties were there most of the day.

It is expected that skating will be good at Sell’s pond during the remainder of the week, perhaps longer.

Sell’s Pond Made Into Ice Skating Resort for City

Through the courtesy of Charles Sell, and the cooperation of Warden Best of the penitentiary in furnishing inmate workers, Sell’s pond has been converted into a free skating resort for the people of Canon City.

The work of making the pond available to skaters was begun a couple of days ago and has just been completed. Skating began there Tuesday afternoon and will be free to the public as long as the cold weather lasts.

In the absence of a place for public skating within convenient distance of town, Mayor James and the city council have been frequently requested since the beginning of the winter months to flood certain low lands about town to afford ice for skating.

The low stage of water in the Arkansas river made this impracticable, and there seemed little likelihood that the authorities would be able to provide opportunities for skating on a large scale, when Mr. Sell very generously offered the pond to the people of the community for that purpose.

Warden Best and the city council combined to make Mr. Sell’s offer a reality to the community. The former furnished the men to clear the snow from the surface of the pond, and the latter used “its good offices” in encouraging and promoting the undertaking.

The ice is in good condition and is thick enough to be perfectly safe, he said.  He has secured the cooperation of Southern Colorado Power company in providing lights, and County Commissioner W.R. Griffiths in providing wood for a fire.

Several skating parties have been using the pond the past few evenings.  All skaters in town are invited to use the pond, the only request made by Mr. Sell is that the property not be damaged.

New Ice-Skating Rink Does Land Office Business Over the Weekend

“How To Have Fun” doesn’t even require 10 easy lessons with the current winter sports recreational program being sponsored by the Canon City Recreation commission and directed by John McPherson.

The three-pronged program currently includes junior bowling, ice skating and basketball – and gives teenagers little excuse to complain “there’s nothing to do around here.”

Nippy nights have finally converted the ice skating rink on College, north of the Rudd Park, into one of the most popular spots in town and as many as 50 skaters have been gliding and spilling at one time, McPherson reports.

All last week the rink was in use but reached the peak over the weekend when skaters thronged there Saturday from early afternoon until 10 p.m. and Sunday found it crowded from 8 a.m. until 8 p.m. Three large floodlights illuminate the rink for after-dark use and a big campfire completes the setup.  Skaters range in ages from three years old to middle-age spread.

Lincoln school has been utilizing the rink to send pupils there for supervised skating during physical education periods.

McPherson is general supervisor of the project and Mr. Hopper has volunteered to aid him.  They report the rink still in good condition Monday morning and said it will remain open as long as the ice stays frozen….

“I don’t deserve all the credit,” W.A. (Bill) MacKenzie protested today.  “There are eight public-spirited businessmen who are in on the ice-skating rink project for this winter with me.

“In fact, they are going to do most of the work.”

These eight, MacKenzie pointed out, will be responsible for overseeing the grading and freezing of the rink and for the supervision of, with somebody on the job at the rink each evening there is skating – which will be whenever the ice can be kept frozen.

In addition, there will undoubtedly be others who will volunteer their services throughout the winter.

Plans are still in the preliminary stage for the rink but it is hoped to have it ready and waiting when old man winter pays his first visit.

The ice-skating season is almost here.

With Canon City beginning to get ready for sub-freezing nights, the recreation district this week was getting the outdoor rink at 12th and College ready for skating.

The area has been nearly doubled in size and water has already run into the pond to soak up the ground. Recreation Director John McPherson said that “As soon as we get a cold enough night, water will be turned in and frozen.”

Harv Cooper will once again look after the grounds and the care of the pond itself, as he did last winter.

From McPherson came a plea to youths to “Keep the area clean. Last year – and again this fall – there were a lot of cans and other debris thrown into the pond.  We’re asking youngsters to help keep the pond in shape and not throw things in there.”

Shortage of pipe has held up the plan to install an ice freezing machine. Pipe is on the government’s list of critical metal goods.  However, if sufficient pipe is found an ice machine will be installed.  W.A. McKenzie, Canon City man, said that his offer to privately buy the freezing unit still stands, if pipe can be found.

Falling temperatures this week maybe were not welcomed by many for a variety of reasons. But the near-100 children at the ice skating rink after school on Wednesday didn’t mind.

After dark Wednesday, lights were turned on and about 50 children and adults enjoyed the sport throughout the evening hours.

Continued cold is keeping the ice in good shape and the rink will be opened again tonight.

Located just across from Rudd Park, on College avenue, the rink is a project of the Canon City Recreation commission.