Are you ready to travel the world without even having to leave the state? If so, stop by the museum this Friday, August 4 between 5:00-7:00 PM during First Friday to see our new exhibit “Around the World in 80 Artifacts”! These artifacts illustrate the diverse history of Fremont County and which objects people considered important. These artifacts came to Fremont County through a variety of means and each has its own story to tell. You never know what story will spark an interest and encourage further learning! There’s something for everyone with so many different objects from so many varied places.

Some of these objects traveled from far away with local families such as a bowl made from a gourd. A favorite of the Director, Lisa, this bowl traveled from the West Indies in 1826 to the east and then on to Cañon City in an ox cart in 1864. Intricate designs of animals, flowers, the sun and leaves were applied to the outer surface with a nail. This family heirloom traveled here with John H. Harrison, one of the first settlers of the area and stayed with the family for a century.

Another beautifully worked piece that is so unique from than anything found in this area is the camel driver’s robe from Egypt. The fabric and design are artfully worked which is why it appeals to the Curator, Nancy, who feels it brings a certain mystique to the exhibit. This cloak was sent home by Glenn Jones to his wife while he was stationed in Egypt during World War II.

Another artifact received while stationed overseas is a Japanese samurai helmet. This helmet was gifted to Major John Merriam by Kiyamoto Wakatabe. Rachel, the Archives Librarian and Visitor Services Manager, loves the helmet for its metalwork and intricate design. Decorated with a crescent moon ornament, this artifact is both striking and practical.

But don’t overlook some of the smaller objects which lend their stories to a larger narrative. One case is a small Russian doll pincushion, received by Laura Huntley by a friend Grace Bennett in 1963. This artifact, a favorite of Kathleen, the Education Coordinator, has a tag on the bottom that reads “Made in Soviet Union.” Though the Soviet Union has long since been dissolved, it spanned the greater part of the 20th century and left its mark in history. This little doll with its knitted cap and red belt is a little piece of that history.

But not everything is so benign, such as a set of katars from India. These daggers even include handgrips for the blades with pieces of steel extending out in an H shape instead of a typical handle. These blades, a favorite of Brandon, the Museum Assistant, were donated by Lawrence Villers who collected them while stationed in India during World War II. One has to imagine these weren’t typical souvenirs!

These are only a few of the artifacts that span history that are within this new exhibit. So feel free to stop by and visit the museum to find which artifact draws you in with its unique story. 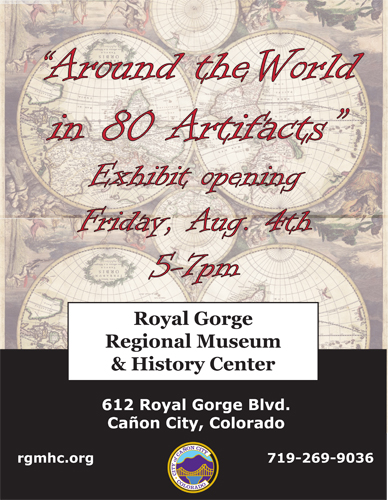